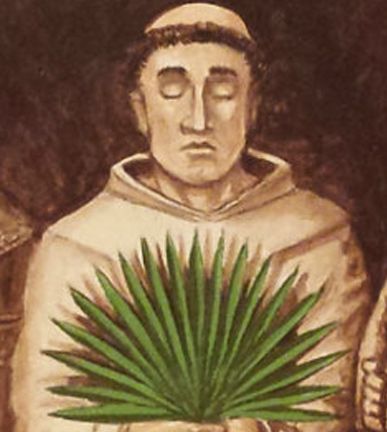 One of the five Servants of God, Fray Miguel is the most distinct personality, and at the same time the most elusive. About him in many regards there is the least certainty. To begin with his name: is "de Añon" to be considered a toponymic or a title of gentility? And is the form more correctly "Añon" or "Auñon"? Escobedo in the manuscript of his poem preserved in the Biblioteca Nacional of Madrid consistently uses "Añon," while Oré in his Relación (at least as transcribed and published by that meticulous editor, the late Atamisio López) consistently uses "Auñon." Further to add to the confusion, some early documents, notably those written in Latin, use "de Ocana" or "de Occaña" – either one of which is meant as a translation of one or other Spanish place-name. In time "de Ocana" began to be cited as though it were not Latin but pure Spanish – and indeed in the Province of Toledo there is a place called "Ocana." Of all these confusing possibilities, Father Omaechevarria opts for "de Añon" – and that is the form accepted by the Historical Commission for the Cause as being that most probable. In the ongoing effort to identify Fray Miguel's birthplace, subsequent commentators likewise are divided, some assigning it to the Province of Saragossa,and others to the Province of Huesca.33

The year of his birth is not certain, but from various references to his priestly activity it is deduced that he probably was born early in the decade of 1540-50. He entered the Franciscan Order in the Province of Castile seemingly about 1570. The date of his ordination to the priesthood is not known, but we do know that he held the title of predicador35 – an honorific title granted only after a certain number of years of active ministry. In 1595 – when, it is thought, he probably was in his forties – he responded to a call for service in the missions of Florida. He was one of twelve missionaries sailing from Spain on July 14, 1595 (in the same group as Fray Francisco de Verascola).36 A full month of travel brought the group to Puerto Rico, where after a rest they took another vessel heading for San Agustin. During that last lap of their voyage they experienced a horrible tropical storm, not uncommon in those waters during the month of September.37 They arrived at San Agustin on September 23.38 Shortly after his arrival, Fray Miguel was assigned to Mission Santa Catalina on Guale (modern-day St. Catherines Island).39 Originally the site of a foundation of the Jesuits during their short period of service in La Florida,40 this mission had been taken over by the Franciscans as a strategic geographical center on the Barrier Islands.41 Fray Antonio de Badajoz was deputed to accompany Fray Miguel in this post, which offered good hope of becoming an ideal mission-station. Fray Antonio, whose command of the native language was outstanding by reason of the ten years he had spent in the Florida mission,42 was selected for this post so as to assist the venerable priest, Fray Miguel, in restoring the importance of the mission which had been largely abandoned for some years after the withdrawal of the Jesuits. Fray Miguel, by his gentility and winning manner, shortly had captured the respect and the friendship of the native Gualeans. He was "mui querido de los indios," in the testimony of Padre Oré.43 Added to his other personal qualities, Fray Miguel was endowed with a singularly pleasant singing-voice, and this captivated the Indians perhaps even more than it did the Spaniards.44

Frequently, as for example in Oré's Relación, Fray Miguel is referred to by the title comisario.45 Once used widely in Franciscan organization of the community, that title of Commissary lacks a precise connotation. It would indicate some position of responsibility, as, for instance, the charge of the Third Order within a provincial unit. Particularly in times past, it might be a reference to a position held previously, the title being perpetually associated with the person who had served with distinction in a given office. As used in the case of Fray Miguel, it seems to be a tribute to some authority which he had previously exercised before coming to the Florida mission. Another title which is occasionally used in reference to Fray Miguel is that of predicador (preacher).46 This would indicate that at some time in his career he had discharged the office of preaching as his habitual occupation or for some special occasions of exceptional solemnity. Once granted, this honorific title was normally retained for life. The references to Fray Miguel as predicador help us to perceive the special sense of respect in which Fray Miguel was held by his confreres.

In this connection, Oré tells an interesting story as he begins to describe the slaying of Fray Miguel. Shortly after his arrival in La Florida, Miguel was invited by the friars and the people of Havana to come to that city to preach to them. Accepting the invitation, he boarded a vessel to make the trip which he thought would be a matter of six or seven days. But on reaching Cape Canaveral, bad weather made it impossible for the vessel to clear the cape. For forty days they were becalmed. Finding in this an expression of God's will for him, he gave up his intention of going to Havana, turned around and came back to San Agustin, resolving to begin immediately the more important task of preaching to the natives. Determined not to leave his Indian charges, he remained faithfully at his post on St. Catherines Island, foretelling that he would receive a great gift from heaven in that post. It was there that he was rewarded with the grace of giving his life in profession of his faith in Christ.47

When in mid-September of 1597 the revolt of the Gualeans erupted, the two friars on Santa Catalina Island were peacefully and surely building the faith in the hearts of their flock. The idyllic situation was reflected in the natives' esteem for the two friars. Gratitude for their presence was typified by the spirit of the local head-man in his efforts to protect the two missionaries from the violent demands issued by the mainland Indians that the friars be put to death. The rebels, having slain Fray Pedro at Tolomato and plotting the death of Fray Blas at Tupiqui, sent a message to the cacique of Santa Catalina, ordering that he should do away with the two friars stationed there. Because of his respect for the religious, the chief refused to follow the evil command. Instead, he called Fray Antonio for a conversation, and, telling him of the plot to rid the missions of all the friars, advised him to flee with Fray Miguel to Mission San Pedro on Tacatacoru (Cumberland) Island, where the whole community under the guidance of Fray Baltasar López was devotedly attached to the Christian Faith. The cacique promised to put at the service of the friars not only canoes but likewise a company of natives to take them to safety.48

Shortly a band of the rebel Indians from the mainland appeared on the island. It was clear that the fate of the two missionaries was sealed. Realizing what was about to take place, the two men of God prepared themselves for death. After Fray Miguel celebrated Mass, he and Fray Antonio spent their last four hours in prayer.

Falling upon the two friars, the rebels killed Fray Antonio, the veteran missionary who had spent ten years in the service of the Cause of Christ in La Florida. Then the violent mob seemed to lose its courage, for they hesitated to move against the venerable priest. An unbaptized Indian, however, came forward and began to beat him with a tomahawk, knocking him unconscious. Though a group of the faithful came forward to defend and save him, another pagan Indian gave him a final blow which caused his brains to spill out on the ground. It is recorded that this Indian within a few days repented of his deed hanging himself from a tree with the rope of his own bow.49