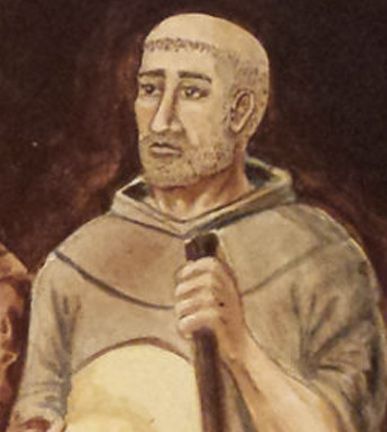 For many reasons the Servant of God, Fray Francisco de Veráscola, stands out from among his fellow-martyrs of 1597. Though he was united to the others by his vocation and the sacrifice of his life for the sake of Christ, the details of his story in many ways set him apart from the other four.

Among the Five Martyrs, it is his life and death that have been the most minutely researched and described. Especially through the affectionate zeal of his conterráneos – from among the Five Servants of God, only he was a Basque – his part in the story of the martyrdom has been the most minutely researched. His memory is recalled each year by means of an annual festival that has been held in his birthplace for almost half a century. Though his slaying was not witnessed by any devoted Christian who could have furnished information about his death, yet the knowledge of his agony has been constructed on the basis of contemporary conjectures and scattered depositions relating rumors. From those records otherwise unknown details of his special personality and his singular story have been extracted by careful study and a good deal of intuition. Though Veráscola still is a somewhat mysterious figure, withal he comes through as a genuine individual and a true hero of the Cross.

According to records preserved in Gordejuela, a town in the Basque region of Spain, he was born on February 13, 1564, the son of Domingo de Veráscola and María Sáez de Castañiza. An ancient town with the typically Basque affection for tradition, Gordejuela had for many years cherished a special attachment and devotion to Saint Francis of Assisi. It was not surprising that the firstborn son of the Veráscola family, baptized on the very day of his birth, should be named in honor of the Patriarch of Assisi. The parish church of San Juan de Molinar, in which he received the first of the Sacraments, is still standing, and the record of the ceremony may be seen in the four-centuries old Book of Baptisms.64

The family of the future missionary and martyr was relatively prosperous. His father, who held a minor office in the administration of the community, distinguished himself for his active role in social reforms for the benefit of the poor.65 In his adolescence and young-manhood, Francisco must have been a comely youth, with the typically Basque mixture of animation and seriousness. Even as a youth he undoubtedly began to display that strength and impressive physique which later gained for him the nickname of the "Cantabrian Giant."66 Certainly it was in this setting that he acquired his taste and his aptitude for forms of sport, a skill he was to use to advantage in winning the friendship and esteem of young people in his future missionary life in the New World.

In time the maturing Francisco sensed a supernatural calling to serve God as a spiritual son of his patron Saint Francisco of Assisi. Though no records have been discovered to tell us when he was accepted into the Seraphic Province of Cantabria, it very probably was in the early 1580's that he made his year of novitiate. In the absence of documentary proof it is idle to speculate as to when he received the Sacrament of Holy Orders, but it can safely be presumed that it was about the year 1590. Described as "a religious endowed with goodness and simplicity," for several years following his ordination the young friar exercised his priestly office in the general area of Vizcaya. He was known to be a religious who enriched his apostolic efforts with acts of penance practiced in private.67

Providential circumstances made it possible for Fray Francisco to satisfy his longing for even greater sacrifices and penances. Toward the end of the year 1594 a call went out for volunteers for the struggling but promising mission in La Florida. A group was to be assembled and to depart under the leadership of Fray Juan da Silva, in answer to the request of the Governor of La Florida, Don Domingo Martinez de Avendaho.68 It is significant that, of the twelve friars authorized to join the mission at that time, all were members of the Franciscan province of Castile, with the one exception of Fray Francisco, a member of the Cantabrian Province. Was he perhaps substituted for another friar, who for some reason was unable, perhaps at the last hour, to join the group?

As one of the twelve he set sail from. the port of San Lúcar de Barrameda on July 14, 1595, aboard the vessel called "San Francisco." Incidentally, five of the twelve friars also bore the name "Francisco."

After observing the feast of the Seraphic Saint Francis on October 4, the new arrivals dispersed to the various places assigned to each by obedience.69 To Fray Francisco fell the challenging task of starting a new mission on the island called Asao (modern St. Simons Island, Georgia).70 This was the southernmost of the Guale chiefdoms, not far removed from the area in the control of the Timucuas, a tribe closely related and allied with the more numerous Guales to the north.

Of all the missionaries assigned to the territory of Guale, at thirty-one or thirty-two years of age Fray Francisco was the youngest. As a token to his zeal and enthusiasm he was the only one of the newly arrived friars to receive the challenging task of inaugurating an entirely new mission. The total impression is given that the new mission on Asao would be an especially challenging post – for which task perhaps Fray Francisco's youth and vitality made him the logical choice.

When Escobedo introduces him in his poem, he calls Veráscola "a kindly and learned Vizcayan, who had two purposes in life: one was the satisfactory fulfillment of every assigned task, and the other was the following in the footsteps of Jesus, joyfully giving himself unreservedly to God as Christ had given Himself on the Cross".71 Veráscola's striking stature and his physical strength were endowments which not only impressed the natives but which he also knew how to use for evangelical and pastoral purposes. It is in this light that we must regard his assignment as the companion of Fray Pedro de Chozas on the dangerous expedition to the land of La Tama in early 1597. There is the clear indication that his physical size and strength were calculated to make an impression on the warlike natives of that region to the north and the west of Guale.72

His youth must be seen as an additional factor to win the friendship and good will of his flock. Even the more elderly among them, but especially the young would naturally be impressed by his athletic ability. Escobedo in his poem La Florida gives a detailed description of the Indian game resembling modern soccer.73 Veráscola's youth alone would be sufficient reason for the assumption that he entered willingly into this game. There is further suggestion of his competing with the natives in their athletic activities in the statement of the poet Escobedo, who says: Solo este vizcaino nuestro amigo, gano de muchos indios la vitoria, luchando contra ellos pecho a pecho, y tirando la barra largo trecho.

("Our friend from Vizcaya vanquished many Indians wrestling with them in bodily contact and in throwing the spear at great distance. ")74 In his exuberant prime of life, he was disposed to undertake any work, he was prepared to lend his natural abilities to any purpose, that would promote the good of the souls he had come to serve. Even a game of soccer can be made the occasion of winning souls for Christ.

Upon his return from the expedition to La Tama, Fray Francisco began to work with redoubled zeal to make his Indians more responsive to the Christian spirit. In his zeal to build up his mission on the Island of Asao not only in the spiritual sense but likewise by providing a worthy place of worship, Fray Francisco had erected a primitive chapel and a crude shelter for himself on the northern point of the island. Around this center of worship, dedicated in honor of Santo Domingo, by the waters of Altamaha Sound, a small village of neophytes was taking shape. The church and the friary needed to be completed so that the community might be more united by a regular routine of organized activities.

For that purpose, in early September of 1597 he undertook a journey by canoe to San Agustin, there to obtain some needed materials for both worship and construction. In Oré's words, he was returning "very glad to divide among his Indians the things he had brought along." From the testimony gathered later it became clear that the friar was overpowered as soon as he sei foot on the shore, having been taken by surprise. Oré in a few words described the slaughter of the friar, the "Cantabrian Giant": "They waited for him and when he disembarked, two Indians took him in their arms, while the others arrived and killed him by means of blows from an ax. Then they buried him."75 His body was never found.