In the late sixteenth century, six Spanish Franciscans came to what is now the Georgia coast to minister to the native people called the Guale.

Between September 14th and September 17th, 1597, all but one were murdered.

Pedro de Corpa and Companions: The Story of the Georgia Martyrs

Ask about old Spanish missions in America, and most people will think of the adobe churches from the late eighteenth century that span the coast of California. Yet these missions, however historic and celebrated, were by no means the first of their kind in what is now the United States.

A full two centuries before Bl. Junipero Serra preached to the Native Americans along the West Coast, his brother Franciscan friars from Spain were spreading the Gospel in what are now the southeastern states.

Before the founding of the first permanent English colony in America or the Pilgrims came to Plymouth Rock (1620), first Jesuits and then Franciscans established missions in what are now Florida, Georgia, and South Carolina. They labored with remarkable courage and devotion to evangelize native peoples of the region, and tens of thousands were baptized, catechized, and provided the sacraments.

Their mission base was a Spanish settlement on the Florida peninsula, St. Augustine – the oldest still-inhabited city in America, founded in 1565. It was here in La Florida, as the Spanish called the colony, that the Christian faith first took root in the lands that today form the United States.

The Spanish successfully established colonies and missions along the eastern coast of Florida and Georgia in the sixteenth century.  Though this territory collectively called “La Florida” was not rich in gold and silver, it was a strategic location since Spanish galleons full of riches sailed back to Europe along the coast.  Fearful of British attacks and unfriendly natives along the coast, the Spanish had an interest in colonizing the region.

After the successful founding of Saint Augustine in present-day Florida in 1565, the Spanish founded a string of missions along the coast, both on the mainland and barrier islands.

Life with the Guale

By 1597 there were five missions in Coastal Georgia where Franciscan friars preached the Gospel, learned the indigenous Guale language, and lived peacefully with the native population.  Most Guale natives not only embraced Christianity but also welcomed European goods such as glass beads, metal tools, various cloths and other luxury items.

The friars lived among the Guale without any military presence, giving evidence to the good relations between the Guale and the missionaries. 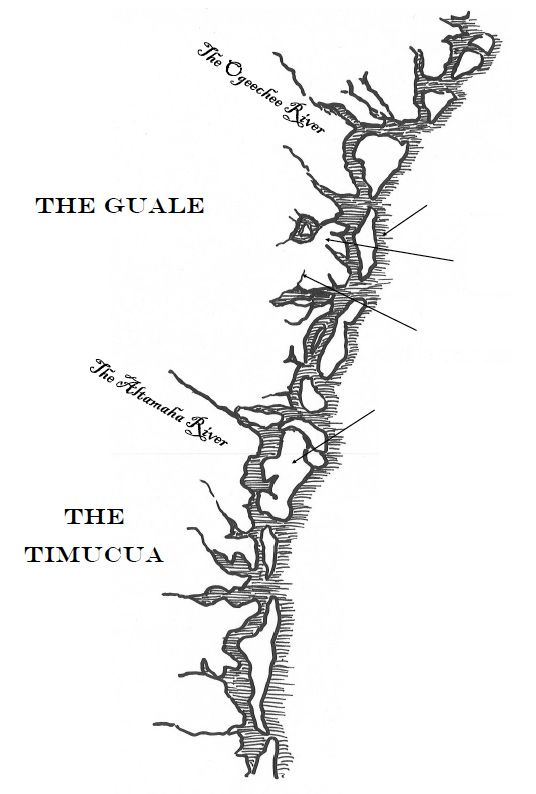 Bearers of the Gospel

Life with the Guale 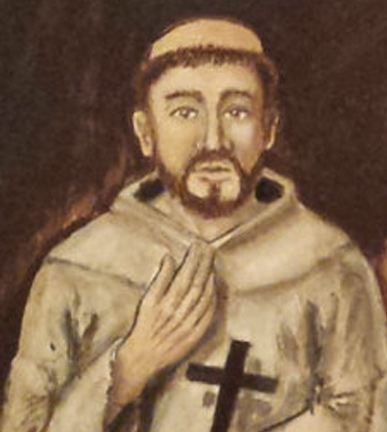 Fray Pedro was a Castilian born in a tiny village in the diocese of Madrid in or around A.D. 1560. He joined the Franciscans in Astorga, was ordained a priest, and had served in the New World Missions since 1587. Since he was the most experienced of the six friars who served the Guale, Pedro was in charge of the Mission de la Natividad de Nuestra Señora de Guadalupe (the Mission of the Nativity of Our Lady of Guadalupe) at the Guale capital, Tolomato (near Darien, Georgia), where their great chief or mico, don Francisco, lived. 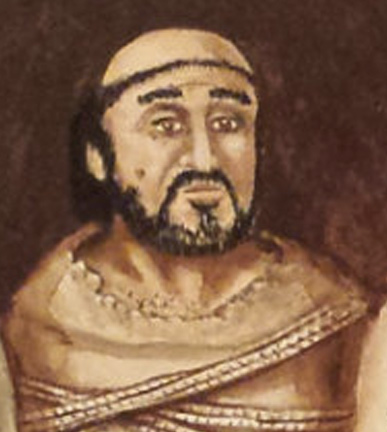 Fray Blas was born in Caucos, Spain around A.D. 1552. Blas joined the Franciscan Province of St. Gabriel at the Convent of Santa Olalla of the strict Alcatarian Reform discalced. Blas had been ordained a priest for almost seventeen years. Back in Spain, he had been called a confessor as he courageously stood up for the Faith there, but Blas Rodríguez did not seek praise, nor even comfort. He volunteered for the missions, and he had already served in the New World since 1590. 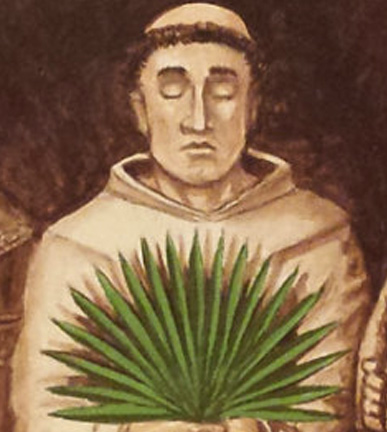 Fray Miguel was likely the son of a Castilian nobleman. He joined the Franciscans at the Covent of Santa Victoria and was an ordained priest who had served in the Georgia Missions for only two years — he was still getting to know the Guale and their language, and he still needed a translator. 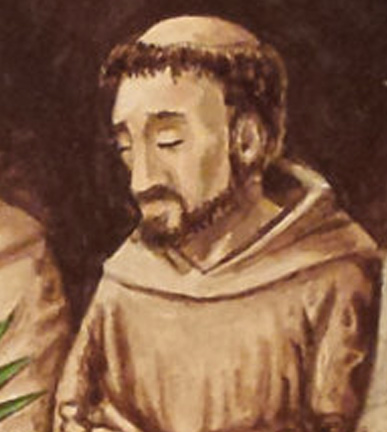 Fray Antonio was born in La Albuhera near Badajoz. Antonio de Badajoz was of the strict order of the Alcatarian reform (discalced). He was a lay brother and not a priest, though he was respected by all the ordained priests with whom he worked as the catechist and translator. He had served in the New World missions since 1587, was fluent in the Guale language, and was working as Fray Miguel’s translator at the time of the rebellion. 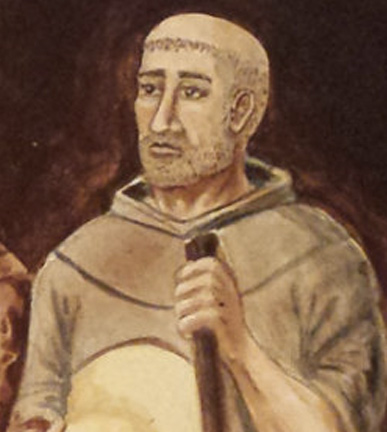 Fray Francisco was born in Gordejuela, Spain on February 13th, 1564 to a relatively prosperous Basque family. He was a Cantabrian Franciscan and joined the Convent of Valladolid. Francisco had been ordained a priest for a few years before coming to La Florida. He had served in the Guale Missions for only two years.

Friar Luis Geronimo de Oré (a Peruvian Franciscan friar) recorded in 1618 after visiting La Florida, that on September 1597, the friar assigned to the mission of Tolomato (near Eulonia, Georgia) did not allow a baptized, Guale man to take a second wife.  Juanillo, who was the heir to a Guale chiefdom, opposed Friar Pedro de Corpa’s fidelity to Christian teaching on marriage and killed him on September 14th, 1597.  Juanillo and the men he assembled continued to the other missions to kill all the friars.

Before arriving to Saint Catherines Island, Juanillo ordered the chief of the island to execute the two friars stationed there, Friar Miguel de Añon and Friar Antonio de Badajoz. Unwilling to carry out the order, the chief begged the friars to flee south to the mission on San Pedro Island (present day Cumberland Island), but the friars refused to believe the rumors of coming murder. Once Juanillo and his men reached Saint Catherines, the two friars were brutally killed after they prayed fervently inside the mission, today marked by twelve palm trees.

The Guale men also killed Friar Blas de Rodríguez near Darien and Friar Francisco de Veráscola as he returned by canoe from Saint Augustine to his mission on present-day Saint Simons Island.

A sixth friar, Francisco de Avila, was kidnapped and experienced horrible tortures until he was liberated months later.

Witnesses to the Truth

The diocesan process for the beatification of Pedro de Corpa and Companions, or the Georgia Martyrs as they are commonly called, is already complete. At the present moment Father Giovangiuseppe Califano, OFM, the Postulator of the Cause, is overseeing the redaction of the final historical document which will be presented to the Congregation for the Causes of Saints next year.

There is currently a need for greater devotion to these martyrs and also more awareness about their story. These five men left everything that was familiar to them in Spain to share the Good News of Jesus Christ in distant lands. They died as witnesses to the Christian faith as they shared with others what they themselves had received.

At a time when the institution of marriage must be strengthened and upheld, the witness of Fray Pedro de Corpa and Companions fills us with great hope. The presence of Spanish missionaries in Georgia over four hundred years ago also encourages the many Latino Catholics who now call Georgia home.

Pray. Spread the word. Join the Cause. 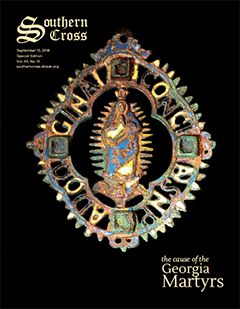 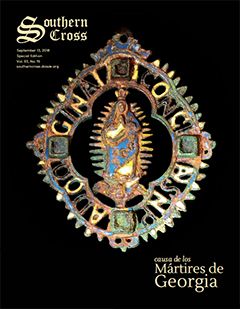 O Lord Jesus Christ, reward the apostolic zeal of Friar Pedro de Corpa and his four companion friars, Blas, Miguel, Antonio and Francisco, who labored for the spiritual well-being of the native Guale people of Georgia and gave their lives in witness to the Christian faith.

Through their merits and intercession graciously grant the favor I humbly ask of You, so that, for the glory of Your Name, their heroic sacrifice may be officially recognized by the Church. Amen.